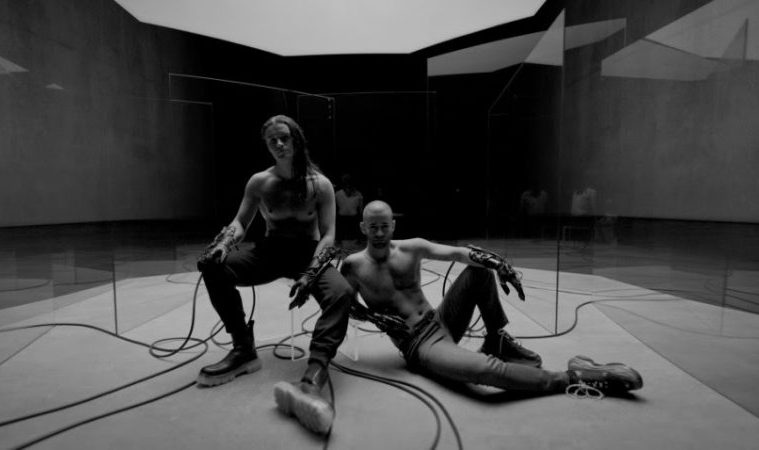 French electronic duo, neumodel, have released the second video off of their upcoming debut record, Rock. The video premiered with BlackBook, praising, “Black Block’ offers a more dreamy, melancholic release, seemingly inspired through the likes of Massive Attack and The xx.”

‘Black Block’ is based on their previous video, ‘HAYAH’ ft. Kiddy Smile. “HAYAH” (meaning in Hebrew: To Be – To Become – To Serve) is a demonstration of strength.

“It is the symbol of globalization, of capitalism, of superficial’s superpower. Its opposite is ‘Black Block’. ‘Black Block’ is ironically an admission of weakness and helplessness. We see from afar and from above the world’s violence around us: symbolized by “the Black Block utopia” -Neumodel

‘Black Block’ is the second video released off of their upcoming LP, “Rock” and maintains the same aesthetics.

“Lost amidst the thousands of sounds coming to life each day, it’s not easy to know where our music taste stands, and to know how to exist – not in the public eye but in our own eyes. We were born in the ’90s and we grew up with Korn, Rammstein, Slipknot and Marilyn Manson albums…Our album and the electro-rock sound vibrating through it is a vivid tribute to this music that resonates with us and which still has a lot to say. It’s not a homage to the artists per se, but it’s more about tapping into a style that has the potential to revolutionize the music establishment – and to revisit this style.We gave birth to our album “Rock”, after releasing 4 EPs. The composing style itself evolved and matured to become more and more singular. It’s a simple formula: guitar, sub, and ‘pop’ vocals. No more keyboards, synthesizers and samples. With ‘Rock”, we are coming back to the essence of neumodel” – Neumodel